I've given up on the idea that you ever hit a milestone in life where those who say, "Just wait till you're in my shoes," look at you and say, "you have credibility now." They say it even if you happen to be wearing those shoes at the time that the sage words are uttered to dismiss your ignorant ideas about how it could go differently. But who really stops to look at the other person's shoes before they dispense their advice anyway; like me generically chewing out the cybersphere to make my own sage words more weighty.

In the "just wait" category of warnings, I'm waiting for my marriage to go into convulsive failure, my children to turn into teenage hellions, and my body to defeat all my best efforts and disciplines at keeping it reasonably healthy. THEN, I will finally know what they are talking about. That's the short list. But at present, I do have it good enough to make myself a little nervous.

It's true that all my efforts will end in a ball of flames, perhaps gradually through personal defeat (Murphy and I are working out the technicalities of that) or shortly after the next predicted end of the world. But it turns out the "just waits" aren't actually waiting to see how you do. Some of them literally can't. Baring superhuman longevity, they'll be dead by then. The kicker to that is, even if I get it right, it's no fun winning a bet with a dead friend. 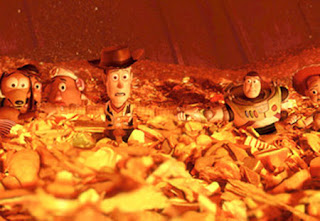 Christ had the same problem. In the sageness (spell check doesn't like that word) of their years and experience, his hometown told him he was just a carpenter's son. The most influential religious leaders told him what was wrong with his doctrine. And his disciples told him what was wrong with his ambition to give his life rather than take the throne. "You just wait. The world is going to chew you up and spit you out like the rest of us." It actually did. And that's the point.

Hardship rather than good times is naturally the more meaningful way we relate to each other, evidenced by "fair weather friend" being a common insult. God relates to us the same way. The miracle is that he's actually able to and has compassion as a result. After he had gone through a world of hurt himself, the apostle Paul said, "No temptation has seized you except what is common to mankind." Let's give others credit for being able to relate our own hardship even if they haven't been through the same thing. It's a good start. The improvement on that would be to encourage, and even hope, that they will know and do better than us. He died so we might live.