I have four children now! That's my good excuse for not posting in a while. Our nearly two year old daughter came home to stay last Saturday. Her history has made family titles a little confusing for her and left me with the simple title of Guy. I'm glad to have it. It's as cute as you can imagine to hear an affectionate "Hi Guy" from her quiet, high pitch voice when she sits up in in bed in the morning before anyone but me is awake. Needless to say, I'm wrapped around another set of little fingers. She's adjusting wonderfully. 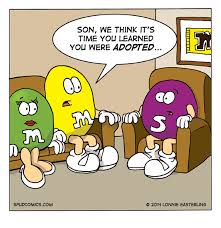 Still, I've been reminded this week how being an adoptive family is unique from a child's perspective. For children too young for advanced reasoning, it's especially tricky. I noticed something amiss with my youngest son, five years old now, after Aria had been home a couple days. He was increasingly bothered by Aria stealing the spotlight and started competing aggressively for our attention. We anticipated his difficulty adjusting to not being the youngest anymore so I pulled him aside for a heart to heart when he seemed near his breaking point. As he sat on my lap with my arms around him, I was ready to hear how much harder than expected it was embracing a new sister. "Yes," he confirmed with that tremble in his voice that tells any experienced parent there's a lake of emotion behind a flimsy dam. "What's the hardest part?" I asked. He burst through tears, "I don't want you to get rid of me." My heart broke.

Perhaps we take it for granted that our family is our family. Kai doesn't. He know's very well that Aria came to us because someone else wasn't willing and/or able to keep her. And he's too young to reason that his own situation is any different than hers was. Perhaps we take relationships for granted in general. We expect something besides ourselves to make them work and last. It reminds me of a question my wife asked when we were newly married, "How do I know you'll never leave me?" I answered, "You don't. You'll just have to see me never leave you."

I had a wonderful father/son talk with Kai and he's better than ever now. He understands with new depth what it means when I call him, "son". At the core, it's devotion alone that secures any family. Natural family members abandon their roles all the time. And, though generally more conscious of being family by choice, adoptive families are breakable too. But there is a perfectly trustworthy adoption. The apostle Paul said it's not the natural children who's place is secure in God's kingdom, it's the adopted children, the one's who are his by choice, not default. That is matter-of-factly the only way God builds his family. I know an imperfect yet compelling version through the love I have for my own children, and it adds depth to joyfully anticipating my own adoption as his son. I strongly encourage anyone to adopt their family (children, siblings, parents, etc). Whether naturally yours or not - make the decision that they are yours no matter what and let them know. If you devote yourself to it unconditionally, it will try you in every way and it's the closest to understanding the nature of God's family that you will get on this earth.
Posted by The Wayfarer's Rod at 8:00 PM No comments: