Reading through some scripture as a family before breakfast, we were considering the passage, "Turn my heart toward your statutes and not toward selfish gain." As we recognized the obvious point that selfishness and Godliness are opposite directions, I made the point that we can't go both directions.

"Well, we can for a little ways," my oldest son answered pointing his fingers opposite directions and crossing them as far as reach would allow.

One of Christ's teachings was, "...unless you change and become like little children, you will never enter the kingdom of heaven." This time, that starts with acknowledging you can in fact go opposite directions with no negative effect (for about half your body length). But this truth has a rather abrupt stopping point, one that my children complain about daily when they yank or pull on each other too hard. A little harder still and the game is over on account of pain. A little harder than even that and you're in the realm of medieval torture. 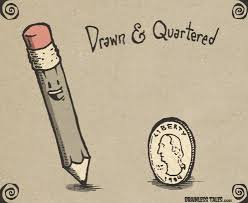 source
Especially when we accept the new nature that God offers us, one that pulls strongly opposite of selfishness, we really do become the rope in a tug of war. Thankfully we also control which side has the advantage. It's when we avoid assigning that advantage that we risk being torn apart as both sides continue to pull in deadlock. A quick think through scripture takes me across Baalem, Jonah and Ananias and Sapphira as a few casualties of this tug of war. If it didn't kill their bodies, it killed their faith.

Sorted out at the level of crossing my arms as far as they can go, I usually end up letting go of things like uninterrupted hours of personal time, big budget toys and job satisfaction. They get replaced with serving others, serving others and serving others. While my new nature is gratified by that, my old nature is a sore loser and would like you to know how justified its tantrum is. Thank you to those who who follow Christ's example and endure being selfless friends with me anyway! You may have to yank on my arms pretty hard but I'll turn back to his statutes before my arms come off.
Posted by The Wayfarer's Rod at 7:37 PM No comments:

Here's a fun game to play if you're a little obnoxious (yes, I am and, yes, I have). The next time you're with a friend in lighting that casts a clear shadow, acknowledge nothing but their shadow, as if it's actually them. Play it out as far as you can no matter how they react. Marvel at how the shadow sounds so lifelike when you didn't expect it to talk at all. Panic when they move and it disappears or gets obscured. Then be even more aghast at the voice now coming from nowhere. If they try to get your attention and their shadow becomes visible again, treat them as a distraction that's preventing you from getting to their shadow, the thing you really care about. Besides being fun for as long as you can keep it up, it also rapidly descends into obviously bizarre and irrational behavior.

If you actually try this, or at least put some honest effort into imagining it, I think you have the platform for some exceptional insight into why faith is such a troublesome topic. As Christ approached us in time, he cast a shadow that reached from Genesis to The Incarnation. A shadow so long that it was visible long before he was, and everyone got used to seeing him that way, as something that shifts with the light or disappears on a cloudy day, something stretched out so far across the landscape that no one could really discern the shape of of its source. Finally, they decided God was the shadow itself and they adjusted their religion to match. 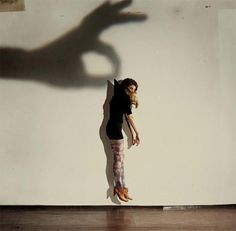 Source
What made this the bizarre and irrational game we started off with was refusing Christ as the source when he finally arrived. He marveled in person at how they accepted the scriptures (especially the prophecies) but not him. And just like our irrational game, that mindset should end if we're not truly deranged. But some of the prophecies themselves assure us we are deranged, that we tend to prefer shadows to real people or, especially, a real God. Shadows are quiet and immaterial. They won't braid whips or flip tables or rebuke you for not understanding them, all real hazards when the source arrives. But a shadow can't take you by the hand and encourage you either. When we need help and we know it, we go straight to someone real.

So here we are with our thoughts still largely revolving around the shadow. God is the shadowman that we shape and manipulate with "scriptural" reasoning rather than letting him speak and act for himself in person. Accepting the source means we don't have to guess how God would respond to many things. With very little extrapolation, we can look at how he actually responded. And even still, I think our comfort zone is closer to WWJD than WDJD (What Did Jesus Do). It keeps him a little more like a shadow. Love the Real.
Posted by The Wayfarer's Rod at 7:55 PM 1 comment: