I sprained my ankle bouldering with my brother this week. I'm normally very awesome (compared to sessile invertebrates) but much less awesome after too large a breakfast, too much coffee and not enough water. And, technically, I didn't sprain it bouldering. I sprained it hopping across a couple small rocks on a well groomed trail to catch up to my brother after we went bouldering. But that's beside the point. I think it's time for a remedial lesson.

I was going to post a picture of my injury but that idea seemed counterproductive. It doesn't look nearly bad enough to support my story or my complaining, so this one will have to do. Everyone knows soccer players are the most believable at getting hurt anyway. 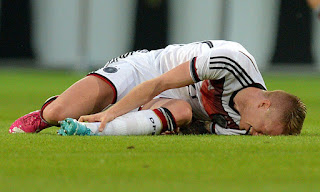 Commence the remedial lesson:
Point 1 - I hurt me. It wasn't the rocks faults. Short and not so sweet.

Point 2 - The rest of my body is still perfectly healthy, but it's not doing most of what it normally would. Instead of the routine activities I enjoy, it's catering to my totally self-centered and demanding ankle. That's actually how a healthy body works. After it's evident that the injury deserves the attention (which does not necessarily include how loudly we complain about it), the whole body caters to healing the still self-centered and demanding body part (which is somewhat acceptable given the circumstance). We'll punish it later in rehab.

Point 3 - When it's healed enough, you break it back into normal use slowly and carefully, though good rehab is selectively inconsiderate of pain tolerance. Skillfully pushing it's limits is actually what finishes the healing process. The consequences for failure to do this are more permanent injury and more time on your butt, both equally difficult to deal with.

Point 4 - Learn something. Take it from a slow learner, this is a very big deal. I sprained my ankle the first time in a severe bike accident many years ago and pretty much annually since then. It hurts a little more and heals a little slower each time. Switching gears for a second, this is especially true if your mind is what sustained the injury. And if you had to bite your tongue when I said that, don't bite it too hard. That's another common injury that can slow you down a little.

Point 5 - Your social circles (family, friends, church, humanoids, etc.) are the body we're actually talking about. We need them and we're not very good at appreciating what they do for us until they're injured bad enough to stop. Yes, this is remedial.
Posted by The Wayfarer's Rod at 8:53 PM