This is what happens when a full size spare delaminates and becomes a giant, rubber, car slapper at 65 mph. Okay, okay, 72 mph. The semi truck in the back ground is a happy accident to give you that genuine broken down on the freeway feel. What you can't see is the broken side view mirror, the car parts scattered along the shoulder and the finger prints in the steering wheel. Also just out of sight is the Discount Tire store two miles to the right that I was headed for. Thirty seconds before this happened, I had just finished telling Leah that I would be late getting home because of the stop. 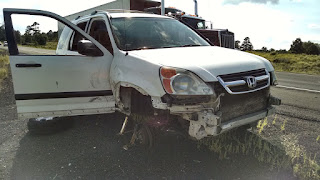 I'm still blaming this one on Murphy, but I left out some relevant details. I put the spare on several months ago. It came with the (used) car when I bought it and doesn't match any of the other tires so I think carbon dating would call it about fifty million years old. But it looked great! Had the best tread of all of them! But that makes sense for a tire that's likely never been used. I also ignored the increasing vibration coming from the tires the week before because I was getting new ones anyway.

The moral of this story is don't antagonize time and chance. Ecclesiastes 9:11 says, "The race is not to the swift or the battle to the strong, nor does food come to the wise or wealth to the brilliant or favor to the learned; but time and chance happen to them all."  While this story raises some fair questions about how swift, strong, wise, brilliant or learned I am, I have brilliantly deduced that I helped time and chance along on this one. So whatever your metaphorical tires are, things we depend on but take for granted (including the people who help us out of jams like this - Thanks Dad), slow down and take care of them when they start to rattle your ride. We're lucky when we get some warning signs to ignore before Murphy has his way with us.
Posted by The Wayfarer's Rod at 7:44 PM