This week has been a good lesson in the basics of authority. Most of us can feel his pain (and rock out to it) when John Mellencamp sings, "I fight authority. Authority always wins," because its painfully true. It's why we slow down when we see a cop, misbehave when the boss is gone and worry about making a good impression on the judge. It's also why kids will suddenly cooperate when they realize you're looking at them with the intent to intervene. I have to confess that's somewhat enjoyable, especially the memories it brings back of being the kid. But on the other side of authority, the side we like to be on, the cop protects you, the boss pays you and the judge makes sure they do.

Authority is also directly related to ownership and location. For the portion of your time and labor that your employer owns by way of your paycheck, the rules are different, and, regardless of what sense they make, you obey them if you want to keep your job, or, more accurately, your paycheck. Likewise, when you're in someone else's house you honor their rules or you leave. The same goes for whatever city, state or country you happen to live in. And like always, we resent authority when it works against us and love it when it favors us. 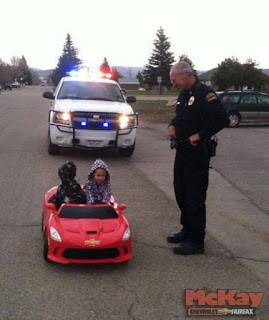 These principles govern our relationship with God as well, with one major exception; he owns everything so there's no way to get out from under his authority. Not that I wish I could either. His authority is what makes his promises worth anything. It's actually the starting point of our faith. Starting without it is a good way to look like an idiot in front of the judge and get chased out of his house with a whip. Thankfully, he's been here and proven he's the parent who's more likely to patiently laugh at his kids while he corrects them than to throttle them in the heat of the moment. Those with children (or dogs that qualify as children) can most likely relate.

But that patience is nothing to take for granted. Just like our reflex is to slow down when we see that patrol car even though we got out of a ticket the last time, our reflex to him needs to be obedience. The authoritative promises far outweigh anything we'll sacrifice for them. Authority always wins.
Posted by The Wayfarer's Rod at 9:47 PM