I'm a runner. That's what I call myself when I'm not running. When I'm running, I call myself a jogger because it rarely feels as exhilarating as I imagine really running would. When I can't keep up with my nine year old son on the downhills, I call myself a poser. When I pass someone on the trail I don't call myself anything. I just work really hard at running fast without looking like I'm working really hard...and then I make fun of myself and gasp desperately when I'm safely out of sight.

Some people really are good runners. I know because I run with them, for the first half mile or so. Then I just watch them disappear into the distance ahead of me. It's nearly impossible to sort out who they are by appearances. I've been humbled (that is to say unexpectedly and severely beaten) by runners whose stride looks like a gimpy tyrannosaurus and others who look like their prime was two or three centuries ago. But what they have in common is, well, if I knew that, I probably wouldn't get beaten so much. So I admire them anyway and take it as inspiration while I spend a lot of time running alone where it's much easier to feel good about myself. That's what you have to do when you're very competitive but not very good. 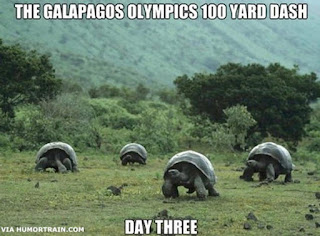 Still, take it all together and I really do enjoy it, every bit of it, though some more easily than the rest. But success without challenges is less satisfying to say the least, even if I have to lower the bar sometimes or just shamelessly kick it to the side and "do it for fun". I'm a runner.

So, the spiritual angle on this one is pretty easy. Just swap the word "christian" for "runner" and you have the story of my faith without changing too much else. A simple word search for "race" results in a good bible study that will go as far as you care to take it. But I do have a separate point to make. When I said I didn't know what the people who beat me have in common, that wasn't entirely true. What they have in common with me and most others who choose to run the race is that, even while they're competing with each other, they're also rooting for each other to finish, to the last one. And the ones who run in front are often the most encouraging of others. This behavior is especially good because running is generally short changed in the department of cheering fans. Not that I blame them. Who wants to stare at the trees for an hour after all the contestants disappear around the first turn? My dad wrote a favorite song of mine called, Weirdos Are Welcome. Thank God they are. Besides making the race a lot more fun, I don't think I would be allowed in it if they weren't.
Posted by The Wayfarer's Rod at 8:27 PM