I was on my way to a friend's party at Miss Kitty's.

"Do you need directions?" he asked me on the phone just before I left the house.
"It's right on the main drag, right?" I asked knowing there was only one major street through Williams.
"Yeh, It's easy to find. It's right next to the Inn just after the road splits. There's a billboard right out front."
"Alright. I'll see you in about an hour."

I can't explain how I missed the sign on the side of the building, but I did. I'm blaming it on a dark, cloudy evening and the fact that I was looking for a billboard. Either that or the presumption that, on occasion, Murphy blinds us to the information we need most for the sake of a good story. Anyway, an hour and a half later, I was completing my third or fourth pass of the downtown loop, two one-way streets running opposite directions, and not feeling like my chances of finding the illusive Miss Kitty's were improving. We had surveyed every building that could possibly serve the purpose. How can you get so lost on a half mile strip? I called my friend who didn't answer his phone. Apparently he was already partying in the covert location I was still trying to discover.

I was a little embarrassed about it when I finally took my wife's advice and stopped at a hotel to ask for directions.
"Miss Kitty's?" the lady behind the desk looked at me quizzically. "They're not open anymore. They went out of business a while ago."
Judging by the expression on her face, the expression on my face must have been worth quite a bit as I struggled for how to proceed.
"Well...I have a friend who said he's having a big party there tonight."
"Oh! Miss Kitty's!" she exclaimed like a profound mystery had just been solved rather than created.
My first reaction was to study her face and see if the joke was on me. I'm not sure if I was more or less at ease to see that she was completely serious.
"It's just a couple buildings down the street from here. It's right next to the Inn just after the road splits. There's a billboard right out front," she offered cheerfully.

My heart sank as I began to question the laws that govern the space-time-continuum in this strange place. With a fake smile and a thank you, I got back in the van and we drove slowly toward our possibly fictitious target. When we were about to pass the last major building and head out of town for the fifth time, I pulled over and contemplated the cars in it's parking lot. This has to be it, I decided as I looked at the large sign in front of it that bore no mention of Miss Kitty's. There was no evidence of a big party there either but I pulled in anyway and looked for a place to park. I found a spot near the large, unhelpful sign.

When we filed out of our vehicle, we found ourselves looking at the sign from the opposite side than what was visible from the road (unless you would have been trying to find it by looking backwards while driving forward on a one-way street). There on the billboard in letters that had been weathered to near invisibility were the now disdainful words, Miss Kitty's. 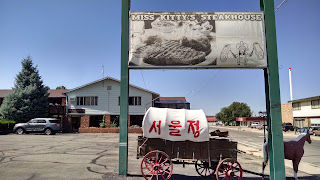 I feel like that about scripture and faith fairly often. You read or hear about something that you really want to be part of. The directions seem very clear and straight forward. Then you set about the business of actually getting there. One of those things in scripture that I aspire to is to "rebuke, correct and encourage with great patience and careful instruction." I didn't rebuke or correct anybody (not too severely at least, though my friend did apologize for not answering his phone) but, on the receiving end of things, it was encouraging to finally get there. Sometimes great patience is required because of the careful instruction you didn't get.

But, to its credit, scripture is actually very good at looking backwards on a one-way street and alerting you to where you are and where you're going. It points out helpful signs we wouldn't otherwise see (like the one on the side of the building I drove past four times). It's right next to the Inn just after the road splits, I promise.
Posted by The Wayfarer's Rod at 12:00 AM