Have you heard the stories where someone gets lost in the snow, decides they're actually in the Bahama's, strips down to their underwear and enjoys the last minutes of their life like a tropical get-a-way? That is unless the camera crew finds them and they end up on a survival show explaining how rational it seemed. I think there's good reason to take those accounts as a divinely arranged preview as much as a physiological phenomenon.

It's obvious that in our mortal bodies these instances represent a delusional state of mind that we can scientifically explain. Though some of us don't need to be that cold to be delusional. 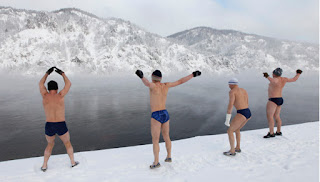 It's interesting that we enjoy the sensations of hot and cold even when they are a danger to us. Just watch a kid play in the snow until their lips are blue and still refuse to quit, or an achy person in a hot tub until their worried about waterlogged body parts falling off. It's in our nature. But what if there was no mortal danger? What if hot and cold were just dynamic sensations that we could sense and appreciate to their extremes without discomfort or fear? Let me justify this train of thought before we get too much further. Consider a couple statements from the Author of science and creation himself - more precisely from Paul and John, but I know God as an accomplished ventriloquist. There's plenty more but these will get us going the right direction:
-"But our citizenship is in heaven. And we eagerly await a Savior from there, the Lord Jesus Christ, who, by by the power that enables him to bring everything under his control, will transform our lowly bodies so that they will be like his glorious body." - Philippians 3:15
-"Dear friends, now we are children of God, and what we will be has not yet been made known. But we know that when he appears, we shall be like him, for we shall see him as he is." - 1John 3:2

Christ flaunted this a little bit for our sake and the potential is far beyond temperature tolerance (though my wife might be happy with just that). A couple biggies were hanging out in a super-heated furnace with his friends and inviting Peter out for a walk on the water. And I think he probably enjoyed our reactions more than he let on. But I still think he might laugh out loud the first time he sees my bare butt making a naked snow angel. That's probably not what they really look like though.
Posted by The Wayfarer's Rod at 9:05 PM