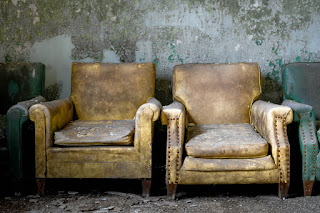 "I still talk to that stupid chair sometimes," says Josie with good humored helplessness. While we're trying to figure out if she's eighty seven or ninety seven, she laughs as she continues, "I'll be reading something and say, 'Oh you've got to read this' as I look up and realize nobody's there. But now I've learned to just go ahead and say it anyway." Her eyes search the face of my son and I through a pause just long enough to be awkward. "That's where he sits now," she laughs again and points to a cheap looking box overlaid with gold foil on a fireplace mantle heavily clad with family pictures, mementos and some odd bits with yet to be explained connections to the pictures. "I don't know what to do with it. I guess I'll just make the grand kids deal with it."

Josie is one of the regular volunteers at the local food bank. Her job is moral support rendered as a welcoming and eclectic stream of consciousnesses aimed indiscriminately at the crowd of workers swirling around her. If she grabs your arm as you pass, it's expected that you give her one or two minutes of your time before walking away mid sentence, as usually you must. She simply grabs the next arm and continues as if the audience never changed. Grave or encouraging, trivial or newsworthy, her conversation makes you smile. Mission accomplished.

Today, we ended up at her house on her insistence that that was the best way to get bread. After the morning's work of prepping the food bank for tomorrow's lines, we followed her home, though we drove considerably straighter. She opened the side door of her otherwise empty garage and the hunger inducing aroma of pallets of assorted bread spilled forcefully from it. She grinned as she watched the crazed look come into our faces. It's a point of pride that her garage is the solution to unattended bread being stolen from the food bank. "Take as much as you want," she says guiding us to the most sought after items as she shares a collection of memories as assorted as the bread. We got what we wanted and looked for a break in the conversation. Leaving mid sentence was becoming the only option.

Suddenly, as if she sensed our dilemma and cared nothing for it, she took hold of my son's arm and was dragging his towering figure into the house as he looked over his shoulder for a rescuer. I followed. The obligatory couple of minutes lapsed over and over as she tugged us from one point of interest to the next until we ended up back in the driveway talking about the neighbors. Just when we were getting desperate enough to try for another mid sentence escape, the neighbor lady came into sight headed our way along the fence. Suddenly we were irrelevant. Her attention shifted to the approaching lady with the bread crazed look in her eyes and Josie juked us like athletes who had lost track of the game. We got in the van and drove home smiling and laughing. Mission accomplished.