I hear prayers to bind Satan often enough it's a wonder he's ever loose to accomplish anything. If it actually worked the way we imagine, picture one guy who can only be in one place at a time and the whole christian world constantly adding ropes and chains to the ones already restraining him. If you're imagination is working somewhat rationally, a conservative result would have our all-time supervillain perfectly and hyper-redundantly squelched on every front, like a sailor trying to escape a submarine surrounded by sharks. If you're actually thinking about how to do that, I'm impressed and we might be related.

The problem is he's obviously loose enough to "prowl around looking for someone to devour." And he has a lot of help, and experience. At present, him and his cohorts that we wrestle against are about six thousand years old so they're extremely well practiced at their evil trade. On top of it all, it's God himself who sends them on their mission sometimes. Thankfully he does put restraints on them that actually work. Since he owns them (and created them), they have to play by his rules, and he's pretty strict; they can't do more than he says and they can't do more than we can bear. On a side note, you might be surprised what you can bear when you quit insisting you can't. On another side note, death doesn't mean you couldn't bear it. Sometimes it means you did. 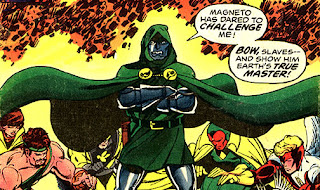 source
Clearly understanding the freedom and sway he has at present along with God's dedication to play by his own rules, Satan even went after Jesus himself when he had the chance. And, even when he failed, he just left him for a more opportune time. Talk about blind optimism! And he didn't even get cast into the lake of fire for it! As far as identifying his actual location after Christ, he kind of flies under the radar. I imagine him being as close to the most influential place in the world as he can get, probably not my house. But I'm sure he's got help nearby. Thankfully, so do we. But they're a whole other topic.

So, step one in the battle against the dark side, be sane. Our enemy is not an omnipresent, all powerful foe just like he's not a bug we can trap in a jar and wait for him to suffocate. The warfare is as complex and serious as anything but it revolves around controlling ourselves, which may actually be harder than controlling Satan.
Posted by The Wayfarer's Rod at 1:00 AM