There's a character in the Bible I can frequently relate to very well. He was a young man who died and rose again and it did wonders for the credibility of the gospel. He also had a very common name... Eutychus. He fell asleep in a third story window and fell to his death while listening "as Paul talked on and on." I love that Luke, a close friend of Paul's, actually described it that way! Paul raised Eutychus from the dead and the night went predictably well after that.

Now, I'm as excited as anybody about being raised from the dead, but I was convinced about that by the end of the four gospels. What I'm more impressed with here is that scripture actually records someone who couldn't stay awake listening to them! Talk about sacrilegious, right? I can imagine his more righteous peers snickering as he started to drool and get the nods. 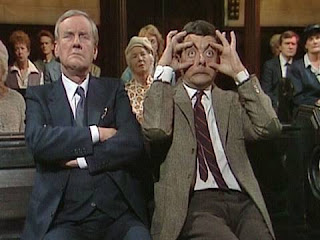 So have you ever sat through a really boring church service that you knew you should be interested in but really weren't... at all. I call it the Sunday monologue more often than I call it a sermon. Don't get me wrong. I'm still righteous enough to sit through some really boring, long winded speeches on occasion, but I don't have the stamina I used to. Let's face it, even the gospel can be terminally boring under the right circumstances.

But religion shouldn't take it personal. Dealing with business meetings or that friendly yapper who can't take a hint is equally gruelling. Let's say that, on a regular basis, my lights are on but nobody's home. It's a good thing that open third story windows meet better safety standards these days. Let's also say that living the gospel is generally much more exciting than hearing it. I'm not saying anybody should preach it less. I'm just saying have some mercy on the guy who's in the fight of his life to stay awake in the pew. And take a lesson from Paul; if you kill 'em with your preaching, maybe they just need some one on one to bring them back to life, even if you have to meet them on the street.
Posted by The Wayfarer's Rod at 6:29 PM