In biblical history, the Israelites have had to deal with a lot of other "'ites"; Canaanites, Jebusites, Hivites and and a host of other people groups that spell check doesn't recognize. As a family, we've been studying our way through the parables in the book of Matthew. While narrating back what he remembered from the parable of the tenants, my nine year old son identified a new group.
"...then the owner of the vineyard turned it over to the Tenanites to produce its fruit."

After we all had a little laugh and continued our study, the nature of the slip became somewhat profound. A targeted portion of the audience for Christ's parable was the religious and political authorities whose forefathers played a role in driving out all the different enemy-ites. Now those authorities had become the object of Jesus's metaphor about people who will be driven out. They had become the enemy-ites. It went over about as well as Jesus's teachings about them usually did. They looked for a way to arrest him. 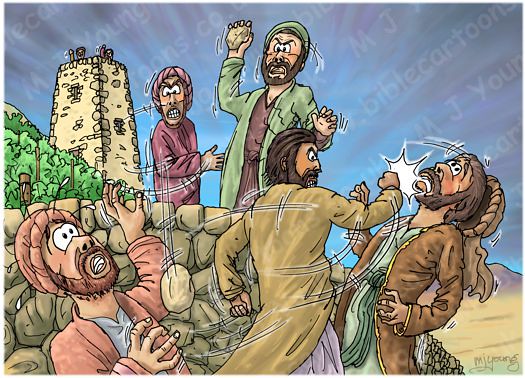 So here we are today with a tendency to feel rather confident about the rights we associate with being Christian. We're well established to say the least. That's partly because of the privilege we've inherited from righteous forefathers. I know our nation wasn't forwardly founded on Christianity but it was close enough that Christians have naturally grown to expect a high level of privilege and influence.

A prominent point in the parable of the tenants is that God's "vineyard", the resources he has invested for the purpose of getting a return, are only for those who have returning it to him in mind. I say all this to pose a question for myself as much as anybody. To any degree and at the risk of fighting God himself, has privilege and influence turned my faith into the means of preserving my privilege and influence? Faith may well result in both but I see the need to keep scrutinizing my own motives to make sure they're focused first on what God expects from his investment in me. It's easy to become a "Tenanite".
Posted by The Wayfarer's Rod at 12:00 PM