"Come, you spirits. Make thick my blood; Stop up the access and passage to remorse, that no compunctious visitings of nature shake my fell purpose!" - Lady Macbeth from Shakespeare's Macbeth.

You're on your own to figure out what compunctious means. Could be another one of those words Shakespeare made up to say what there wasn't a word for yet. What I do know is it's more than fun listening to my sweet-hearted daughter trying to embrace her evil side well enough to deliver such a soul chilling line in this year's Shakespeare co-op. This morning, I caught her on the couch with that distant, nearly teary thoughtfulness in her eyes and I stopped to ask where her mind was at.
"I was just thinking about how God gave us the knowledge of good and evil."

Not exactly what I was ready for.

She continued, "It's good to know Him with the knowledge of both so that good means something."

Since I couldn't keep up with intellectual rigor of the conversation, I did the fatherly thing and said, "I'm proud of you" and walked away before it became obvious I was out of my league. 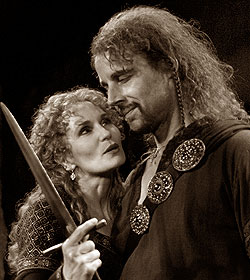 I felt my feet come back underneath me a little later as she was struggling to give into her dark side for Lady Macbeth. Now this I can help with!
"Remember that time when you where really angry at your brothers for calling you a name?"

"Angry," she answered patiently wondering how I could say she felt angry and then ask how she felt in nearly the same breath.

"Did you have any thoughts of wanting to do something to them?"

Can't you just picture Satan wearing my skin and masquerading as a real dad right now? With a slightly evil edge to her sweet-hearted laugh she slid her pointer finger across her throat with the sound effect of a juicy cut and finished with the necessary tongue hanging out of the mouth and to the side.

"Now you're Lady Macbeth," I said and her smile broadened.

Before you worry about me creating a junior sociopath, my wife and I encouraged her take the role against her objections by focusing on the good character that the play promotes through the victory of prince Malcolm in the end. The greater the bad guy, the greater the good guy who beats them, right? And there it is again, "It's good to know Him with the knowledge of both so that good means something."
Posted by The Wayfarer's Rod at 2:22 PM