Like most households with young boys, mine is full of Legos. Designated containers hold all the ones that don't fit in the nifty, see-through vortex chamber in our vacuum cleaner. I have come to regard them as the trademarked building materials of young, male life. Yes. I've seen and own the girl's sets but they don't seem quite so indispensable yet (though they're actively working on that). At any rate, the imaginations of any day take shape through them and get brought to me for display. I have a reputation for being tough on fragile things so they frequently come with special handling instructions like; "Don't touch this, Dad. Just look at it", or "Don't try that lever. It's not finished yet." More than once, the creation has been nervously snatched from my hands only to implode on its own. Thankfully, these are usually quickly built and easily repaired.

Scripture says our lives are likewise a building project that gets tested in the end. The goal is to build something that lasts into the Kingdom, something fireproof. We all start with the same foundation, Christ, and go by the same basic rules. But that is perhaps the end of the similarities. Some build mansions that blow away in a stiff breeze and some build sheds that double as bomb shelters. One clue we're given is to carefully select our building materials. Some burn. Some don't. Patience, generosity, selflessness, and the like are generally invincible. The more earthen things, not so much. But don't think the earthen things are automatically useless. Just like safety glass is made from sand (a bad foundation for sure), generosity and selflessness are often made from groceries and hand-me-downs. 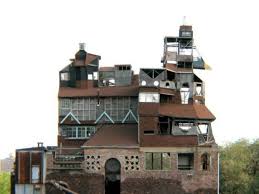 source
Another clue is there's a careful balance between the earthen materials and the eternal ones. The resources we spend on getting and maintaining that bigger, better anything are resources generally diverted from generosity and the like. I say that on the assumption that none of us are working with endless resources (If you are, I'd like a large, interest free loan). In our own favor, we really can do a lot with a little when we're devoted to it. I was always proud of one school project in particular where we had to build a toothpick bridge. Beyond a few dimensional specifications, the design was up to us and the finished bridge was tested for its strength to weight ratio. My instructor doubted my minimalist design but it went on to set the record with toothpicks to spare. In toothpick land, I could have built built a shelter with what I had left for the people who lived under my fantastic bridge. Get it? Got it.

To perhaps put you at ease a bit (though not too much I hope), when The Judge was here in person, no one got rebuked for being rich, though some got rebuked for being mastered by riches - their wealth determined their character. Another perk is you'll have trouble building anything eternal that doesn't benefit you now. You're basically plugging your favorite virtues into the "goes around - comes around" circle. But however we work the balance, we don't get to turn in our project with special handling instructions. Some slide through the test with little more left than a red hot surf board and singed hair while others receive a rich welcome. Whatever you build, don't forget the foundation is Christ. Then, you'll at least have a place to call home, even if the test peels the roof off. You'll have have time to build a better one anyway.
Posted by The Wayfarer's Rod at 12:00 AM