Growing up, church often seemed like a lot of strange fragments loosely connected through Christianity. Healing was one of those fragments. Everybody liked it. I did too, it was fun; lots of excitement and loud prayers bossing Satan and his sickness causing demons around like we were the masters of the WWE spirit world, "in Jesus name" of course. I can't criticize the excitement too much because Christ's first round of disciples were initially excited about it too, until he redirected their excitement to The Lamb's Book of Life. I imagine their transition was as difficult as ours. Legit or not, the natural sensationalism of miraculous healings is much more immediately gratifying than a guaranteed ticket to the good side of the afterlife. 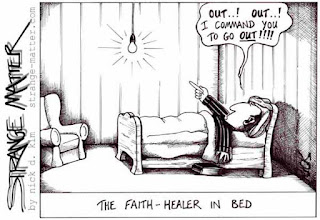 source
My family and I have been sick in the last weeks same as many of you, not the worst but still the kind that makes you wish faith, anointing oil and group prayer where as magical a combo as we're led to believe. Misery really tests us. I do join the rest of you in praying for other people to get well, especially when it's close to home. It's a matter of obedience, and, despite my tone, I don't believe it's any more futile than it is predictable. But I do think we might be looking at it from the wrong end. As I hacked in bed and contemplated the credible healings from scripture, a striking thought recurred to me; They're all dead! In all the hope and excitement, I don't think that point ever stuck with me as well as it should. Christ even made it himself while he was healing people!

The fresh meaning struck me when I asked when sickness started, between coughing fits. I'm a young earth creationist so the answer is the curse...from God. Uncomfortable as that point may be, it makes solid sense of why scripture frequently connects healing to proof of authority to forgive. God put the curse (sickness and punishment) in place with his own authority and he alone can lift it (healing and forgiveness), as he pleases. And his earthly life was a preview of that bigger plan. As novel or necessary as a healing may be, The Lambs Book of Life really is the offer you don't want to miss. And with the authority of that greater offer already well established, miraculous healings for perishable bodies may be the dead horse God isn't going to beat much anymore. Guess I'll have to slum it this time and rely on his perpetual miracle of my immune system.
Posted by The Wayfarer's Rod at 11:18 AM