I recently finished a project that was consuming a lot of my time and replaced it with a bit more of my aquarium hobby. I've taken to discus this time around. They didn't take to me quite as well as I took to them. To be more precise, I was ecstatic about the beauty and movement they added to my tank until the movement became death somersaults about five minutes after they hit the water and their colors became different shades of gray and black (that's generally bad for a fish that's supposed to be iridescent blue).

The problem with discus is they hate water that's not perfect (hate as in they'll die to prove the point). So I didn't have quite enough oxygen or warm enough water, right? Who cares? I do! I spent way to much on these fish (Laugh at me now. Your hobby blunder is coming). And the resident population of inconsiderate fish in my tank didn't warn me about this. They've adapted to my incompetence (like my wife) and didn't think the problem was worth mentioning anymore.

Fortunately, fresh air does as much for fish as it does for me. An emergency water change and lots of aeration saved the day. Now they're swimming around happily sporting their colors and polluting my water without protest. Except for one. He went to the light and donated his mortal body as fertilizer. Why do I pay for this? 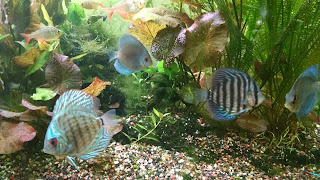