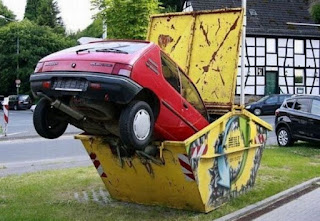 In the start-up days of my shop in Camp Verde, the trash truck driver would go out of his way to scold me weekly for an empty dumpster. Every Wednesday morning, I would hear him pull up at the side of the building, rev the hydraulics to hoist the dumpster over the truck and then bang it against the top of the cylinder stroke a couple times to make sure it's contents were not merely stuck. Next, I would hear the dumpster land with an angry thud, the truck engine drop to an idle and the driver door open and slam shut. "You should have a flag that you put out when it needs emptied and if I don't see it I won't stop," he would say with strained professionalism. "Traffic is really a pain in the butt. These Main Street idiots don't care what's backing out in front of them. They won't give it any room" I would sympathize a little and he would go on his way marginally satisfied.

These days, my business is well established and my dumpster is satisfactorily full when he comes... all be it every other Wednesday. I can sense his happiness to hear all my scrap bicycle parts clanging through the transition into his truck and my dumpster lands with careful precision in front of the designated parking block. Even the occasional overflow item at the side of the dumpster gets taken without complaint. The traffic is as bad as ever and my parking lot is still a tight maneuver for his truck but, with a legitimate purpose for his stop, he leaves with a smile and a wave if I happen to be out front at the time, as I often am.

We all hate busy work (and it's counterpart, rework), paid or not. And God himself knows having something real to accomplish even in a mundane task is a big deal! Likewise, our lives are not a mere going through the prescribed motions. The Gospel presents us with lives of great consequence, especially in how we choose to handle the mundane things. There really is stuff in the dumpster and it's meaningful to the shop owner and neighbors who use it illegally that it gets emptied. There really is an excited kid on the other side of that trashy bike their grandma just brought in for me to fix. There really is a trash truck driver who's whole morning was better than usual because a polite driver gave him plenty of room to back out this time. So, "Whatever you do, work at it with all your heart, as working for the Lord, not for human masters, since you know that you will receive an inheritance from the Lord as a reward. It is the Lord Christ you are serving."