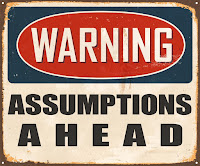 The best reactions to being a calico adoptive family happen to my wife when she's out without me. Today in Walmart she changed directions in an aisle only to find another woman in her face who asked, "This is gonna sound weird but can I blow your mind?"

"Uhhh...maybe," my wife answered trying to make the abrupt transition from grocery list to stranger danger with all five kids in tow.

The lady pulled out a large wad of twenties and appeared to debate how many to part with while evaluating Lani closely. A single twenty was offered with the advise that it was for ice cream or something else fun for the kids... "not cigarettes and alcohol." At this point the evidence indicates this lady didn't realize the kids were adopted so the impression was that my wife "gets around" and still doesn't have a man to help her through Walmart. Tough life.

Scripture says if someone's gift is giving let them give generously. So twenty bucks bought an awkward "thank you", a four pack of kids movies and some fancy school folders. Mind blowing? Uhhh, maybe. God has a good sense of humor that's hard to track with sometimes. But even when the joke happens in the canned tuna aisle, it's funny. If anybody needs a mind blowing twenty dollars, I can officially afford to pay it forward now.
Posted by The Wayfarer's Rod at 4:16 PM