I think packaging is designed under the forced labor of delinquent elves who failed rehab. My other theory is Satan, the Antichrist's contribution to Christmas. Packaging should come with a list of tools you'll need to open it just like complex furniture comes with a list of tools you'll need to assemble it. It's basically the same process in reverse, takes about the same amount of time and also promises to go better than it does. First you turn all the twist locks a quarter turn to the left to separate the plates of bullet proof glass that protect your item in the war zone environment of the store shelf. Once the plates are removed, you use your tamper proof screw driver to remove the even more tamper proof screws that hold the preformed display plastic; you know - that clear sheet of kryptonite that ensures the perfectly arranged pieces of that dollhouse would look just as tidy after a 15.0 magnitude earthquake. And just in case an eager child is waiting to promptly snatch one of those tiny pieces and choke on it as soon as their little hands can touch it, -not to worry!- every single piece is individually secured to that stupid little house by string that you couldn't cut if your life depended on it... and it does! Don't underestimate the wrath of a small child who has to wait more than fifteen seconds to get that damn thing out of the box! 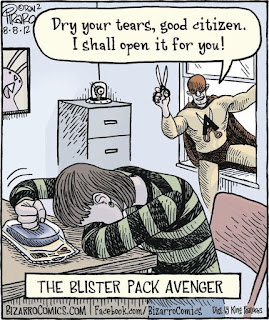 So I might have exaggerated a little but there's a point to be made here. Don't let Satan or delinquent elves help with Christmas (or packaging in general). On second thought, maybe that's not such a bad idea. By design of the one who runs the whole show, that packaging goes a long way toward making sure that only the person who paid for the product gets it, and gets it with no nicks, dings or missing pieces. That packaging also gives you a good idea of just how much potential that dollhouse has before you trash it trying to get it out of the box.

Of course this is actually an overreaching, spiritual lesson that we're going to apply to Christ, the namesake gift of Christmas until such a time as we rename it and celebrate something else. He comes in the daunting packaging of The Bible, a man named Jesus and the laws of nature. Mankind has been working on unwrapping that packaging for thousands of years but we still don't quite have him out of the box. Most decide it's not even worth opening and the delinquent elves rejoice. But be patient. His promises are a gift received only by those who prove their interest by persevering against the evil packaging people.
Posted by The Wayfarer's Rod at 10:05 PM