The Fountain of Childishness

Caution! This is one of those things tricky as a sword swallowing contortionist but equally impossible to not look at when it's put in front of you. It's a little preachy and you'll have to carefully sort it out for yourself. In front of us this time is the teaching that we should strive to be dependent on God. We could split hairs and churches over what that "actually" means (Oh, wait. We already have), but as usual, I'm going to tackle it from its over simplified face value to make a point.

My mom recently told me of a particularly nerve racking time when she was facing the possibility of three children in diapers at the same time. Thankfully, nature (that's code for potty training) ran its course and she narrowly missed that reality. The moral of that short story is that, from the time we're born, it's good to grow progressively independent, and ultimately to adulthood. It's foundational to the joys of watching children grow. Avoiding it is obnoxious like the ceaseless squawking of the adolescent bird that chased its unsympathetic parent round and round our picnic table looking for a handout the other day. Said from a more obvious angle, how quickly and universally do we recognize it as a disorder when someone, especially a child, fails to grow mentally or physically. 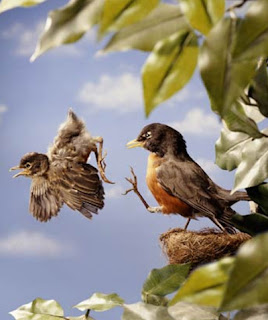 Now imagine a group who are spiritually "born again", enlightened if you will, and from the time of that spiritual birth, they are content or even ambitious to be as dependent as possible, to do nothing without being told, to be spoon fed every meal, to sit in their own waste until the stench compels someone else to take care of it for them. While this may suit those who profit from those services, it certainly doesn't suit those who need them. The very least you would have is an unprofitable person, precisely the opposite of what God has in mind when he encourages us through parables like the talents, the shrewd manager, the vineyard workers, etc. And while a small percentage of us are rightly dependent (children, handicapped and the like), the rest of us are rightly beyond it.

Let's add to all this that dependence on God is an inescapable absolute like gravity, and trying to be more dependent is like trying to be heavier by thinking about it. Go stand on your scale and try it. It's something that calls for humility, not effort. Our dependence is only valuable to God in that we learn our need for him as he perfects and grow us, like an accomplished lioness teaching a cub to hunt or a falcon teaching a fledgling to fly. And while the method is sometimes getting kicked out of the nest and told to fly before the ground hits us in the face, it's still the obviously good and natural order to life and happens only when he knows we're ready for it. So don't let religion trim your claws or clip your wings. God's ambition for you is independence, not to avoid being bothered by each other but rather to have much more to offer when we're together. Child like, not childish. Dependable, not dependent.
Posted by The Wayfarer's Rod at 10:28 AM