Because I Said So

I'm going to shoot for generically relatable this time. I'm also going to assure you that everything's fine and I still love Jesus. Now that that's done...
If you've lived through much at all, there's times when you give up on things making sense. By necessity, we have to go on even if we can't line up the loose ends in our minds (that's a lot of loose ends for some of us). It started when we were young and learned to recognize "because I said so" as a final warning that things were about to deteriorate rapidly if we didn't relax and comply. Perhaps we had questioned things too much by that point. Perhaps the first question was too much.

So I've gotten older and nothing has changed except the person that says, "because I said so." The phrase is rendered a little different most of the time now; "That's just the way it is", "If you don't like it, there's the door", "One more time and I'll kill you", etc. But it's essentially the same: you don't have to like it, you just have to deal with it. 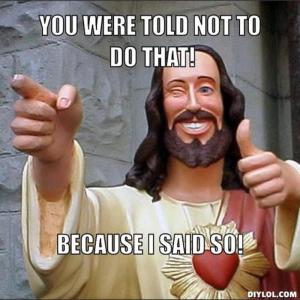 Sometimes, It's God himself who says it, and I respectfully respect that. I've said before that, in the present, I know God as an accomplished ventriloquist and that's still true, but here's my scriptural translation. "Before Abraham was, I am" reads "because I said so". "I only say and do the will of the Father" reads "That's just the way it is".  "Will you leave too" reads "There's the door". I'll leave it up to you to sort out "One more time and I'll kill you".

Work, home and the world at large have that tone lately. And I think I'm just going to let the loose ends spark and crackle like high voltage power lines for a while. It's a good show but it's not mine.
Posted by The Wayfarer's Rod at 8:40 PM