The Truth About Grilled Meat

I was wondering what to write about this week until I went for a run, then it hit me right in the nose, mesquite barbecue (or anything done skillfully on the grill for that matter). Some inconsiderate neighbor with no regard for my endless struggle to stay focused had his delicious smoke drifting across the street right in my path. The next time I put Leah's teriyaki chicken on the grill, I hope the smoke blows his way and sabotages whatever he's trying to pay attention to.

There's a dark side to that delicious smell, though. Before it was tantalizing our noses and triggering our salivary glands, it had a life of it's own, except in the case of veggie burgers and fake bacon which are admittedly impressive attempts at duplicating what's naturally irresistible, carefully cooked flesh. "I want to eat something that had parents," is how one comedian said it.

What we may not think of right away, and possibly be offended by, is how straight forwardly God can relate to our pleasure in that way. In the Old Testament, he said sacrifices (prime animals cooked on a very big grill) were a pleasing aroma. In the New Testament, there's a twist. We're the ones on the grill! We're encouraged to, "...offer our bodies as living sacrifices, holy and pleasing to God." Christ drove home just how literally this was intended when he said "Whoever eats my flesh and drinks my blood remains in me, and I in them." I hear he's got some killer recipes. 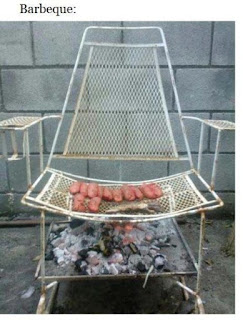 Don't worry. I'm not a cannibal. But think about how literally that's true of the flesh you can't wait to eat off your grill. It's flesh and blood literally becomes your flesh and blood when you eat it (especially if you're one of those weirdos who like blood sausage and rare stakes). It becomes the energy you burn to live and the substance your body uses to build and maintain itself. You are what you eat, right? So if Christ is on my menu and I'm on his, that's all the better for me! Think about that the next time your olfactory receptors take you to heaven in a cloud of smoke. That pleasing aroma is a sweet reminder of just how literally we're made in his image and likeness.
Posted by The Wayfarer's Rod at 6:48 PM